St. Paul’s United Methodist Church had its beginnings in 1836 when the first Methodist church was built here in Orangeburg at the same location of our present day church sanctuary. Our congregation outgrew this structure and a second church was built on the same site in 1859 and occupied in 1860. The membership totaled about 50 people at that time.

By the 1890s our membership had increased to over 400 in number, and our current church sanctuary was built from 1896 to 1898 on the same location. The old church was moved without its basement to another part of the church lot and used as a Sunday School building until our current adult building was built in 1912. By this time our membership had reached 890, a number larger than all other churches in Orangeburg combined. 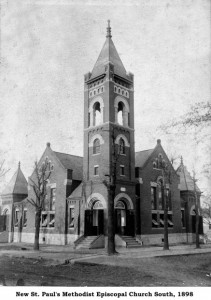 Our first pipe organ was installed in 1902 in a specially built alcove behind the pulpit area. Sunday School was traditionally held on Sunday afternoons until 1917, when it was changed to Sunday mornings. Wannamaker Hall and its upstairs classrooms were built from 1919 to 1921 to accommodate St. Paul’s tremendous growth through the years. In 1923 St. Paul’s was very fortunate to have the world famous, Billy Sunday, preach here to an enthusiastic overflow audience.

St. Paul’s has been the host of the South Carolina Annual Conference six times through the years, the most recent one being in 1939.

The Children’s Sunday School Building needed to be built in 1953-1954 to be able to house our ever increasing membership. Since that time our church office has occupied one of its wings, and our Kindergarten and Day Care has used another area in that building too.

By 1956 St. Paul’s celebrated its 150th year of existence with much fanfare. The year 1998 saw the 100th anniversary of our very beautiful sanctuary building, and Bishop J. Lawrence McCleskey delivered a most eloquent sermon during this celebration. A time capsule to be opened the year 2048 was also buried in front of the sanctuary.

St. Paul’s has enjoyed a wonderful history through the years, and with continued love and devotion, will remain a prominent influence for the love of Christ in downtown Orangeburg in the years ahead.